For 18 of the last 19 years, the Toyota Camry has been the best selling car in the world. There are many reasons why it continuously holds this position, starting with the fact that over 90% of Camry’s over 10 years old are still on the road today. But if that isn’t enough of a reason, you can look at other accomplishments by the sedan such as being named “Best Retained Value Winner” by Edmunds.com in 2016 or #1 on the 2016 American-Made index by Cars.com. If that isn’t enough, you can look at the numerous safety awards it holds such as its 5-star NHTS-A overall rating. So knowing all that, what more could the Camry offer with the new 2018 model that just launched? 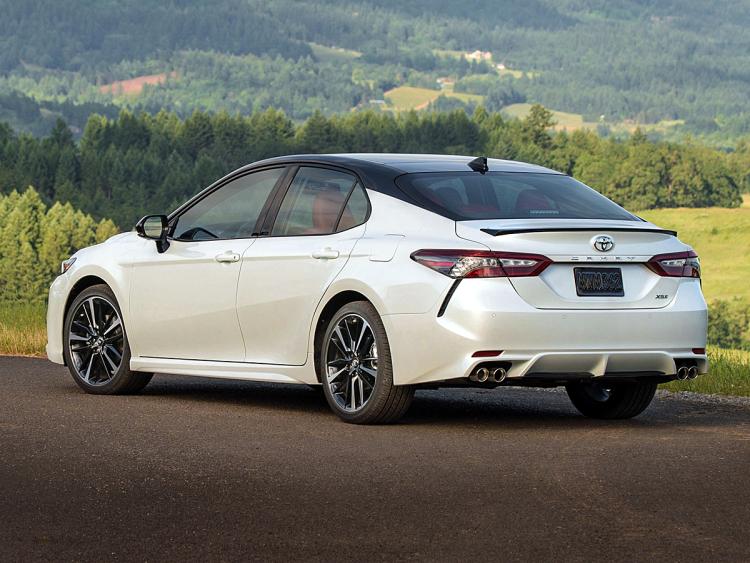 A new aggressive and sporty facelift (and….rear-end lift?) and increased power and fuel efficiency is just a start. The new 4-cylinder offered by the SE, LE, XSE, and XLE trims offers a boosted performance thanks to Toyota’s new Dynamic Force engineering which provides an increase in air flow and efficiency, along with a new 8-speed automatic transmission (CVT on hybrid models). It allows the 2.5L engine to pump out an increased 203hp and 186 lb-ft of torque (206/186 in the XSE thanks to quad exhausts). This increase in power is accompanied by an increase in fuel efficiency of 28mpg city / 39 mpg hwy. This same motor in the hybrid LE version offers 178 hp, 170 lb-ft of torque, and up to an impressive 50mpg city / 53 mpg hwy. If the power increase of the 4-cylinder isn’t enough for you, you’re still in luck. The XSE and XLE both come with a 3.5L V-6 option that offers an incredible 301hp and 267 lb-ft of torque. Even with this power the V-6 still serves up more than adequate fuel mileage at 22mpg city / 32mpg hwy.

Outside of performance, the body has been completely redone to provide a better stance and more aggressive look, as well as a completely revamped interior equipped with all the bells and whistles such as wireless phone charging.

Let’s not forget about everything the vehicle offers that you can’t see. Standard on the new Toyota Camry is Toyota Safety Sense which includes Dynamic Radar Cruise Control, Lane Departure Assistant, Automatic High Beans, and Pre-Collision System with Pedestrian Detection.

An aggressive appearance, a smoother ride, more power, better fuel efficiency, better safety, more features…we’ll leave it at that, and if you need more of a reason to consider a 2018 Toyota Camry, you can read a few reviews here and here.