The All-New, Completely Redesigned 2019 RAV4 Is Set To Change The Game … Again

It’s almost hard to believe Toyota’s RAV4 debuted in the U.S. 22 years ago. When it arrived, it launched a new vehicle class: the compact crossover SUV.

The completely redesigned 2019 RAV4 – which is set to arrive at Denny Menholt Toyota yet this month – will likely disrupt the class it created.

The RAV4 will offer even more sport and utility, while enhancing the handling, comfort, and fuel efficiency.  The 2019 RAV4 is designed to tackle urban, suburban, and great outdoor adventures equally well. Its new look is tougher, and there’s greater capability with a new type of all-wheel drive. At the same time, the ride is smoother and quieter, with new touches of comfort inside. Plus, the new powertrains increase performance while reducing how much fuel the RAV4 uses.

Basically, the RAV4, the compact crossover SUV trend-setter, is poised to, yet again, change the game. 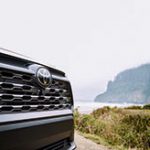