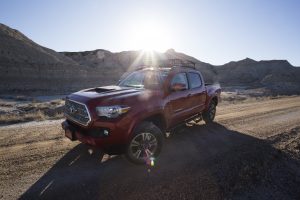 Kelly Blue Book recently released its list of the top 10 2018 cars with the best resale value. … Except, there weren’t very many cars on the list.

But what does resale value mean to you?

Resale value — sometimes called depreciation — is an important factor to consider as you shop for a vehicle.

According to Kelly Blue Book, the average brand-new vehicle will be “worth about 33 percent of its original sticker price after 60 months.” But the trucks and SUVs on its top 10 list “will return an average of 51 percent to their owners’ pockets.”

Put into concrete terms, if you buy a vehicle for $30,000, there’d be a $5,000 difference over five years — which works out to a grand a year. So resale value can really add up.

Check out the top three vehicles on KBB’s list:

The Tacoma has ranked number one in resale value for four consecutive years.

Tundra isn’t the best-selling full-sized truck, but it continually posts the best in resale value.