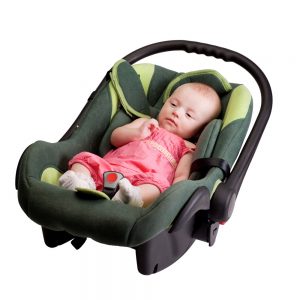 Toyota and Cincinnati Children’s Hospital together created the Buckle Up For Life campaign to promote healthy car seat practices. Gloria del Castillo, national program manager, recently explained that “an alarming three out of four” car seats are not installed properly.

In honor of Child Passenger Safety Week, which was from September 13th through September 19th, Toyota released a factsheet with some tips for properly using a child car seat.

First of all, car seats have an expiration date. That means that if your fifth child is using your first child’s car seat, it may be time for a new one. According to Toyota, this date can be found somewhere on the seat.

Some parents are unsure when it is okay for children to move up front. As a general rule, “all children under age 13 are safest in the back seat.”

Another issue that has some parents confused is when to make the transition from rear-facing to front-facing car seats. The American Academy of Pediatrics recommends waiting until your child is two to switch to a front-facing seat.

Being a parent is hard enough. Toyota and Cincinnati Children’s Hospital have made it easy for parents to learn how to properly use and install a car seat here.