It’s the morning of the Paint the Rock Pink tournament, and golfers head to their various holes for the shotgun start. Veronica and Jodi, in keeping with the tradition of the tournament, have decorated their cart for the event. The front features a bikini and grass skirt, luau style, and the top is covered with balloons. But as they head to their first hole and drive under some trees, a couple of the balloons meet branches and break the serenity with a loud “POP!” Laughter immediately follows the sound, echoing down the trail. By the end of the day, sadly, no balloons had survived. But Veronica and Jodi were still having a ball. The mood typically lasts the entire day, as evidenced later in the morning by this exchange: As her teammate lined up a shot, Betty stood off to the side, watching. Her teammate hit. It … didn’t go well.

Before she can stop herself, Betty declared, “Oh dear me. That ball’s a goner!”

Her teammate who hit the ball looked over with a grin. “Yes indeed it is, Betty!”

“Sorry, I didn’t need to say that out loud,” Betty said.

But everyone laughed, and they’re soon visiting the table where we’re serving vodka lemonade and offering stress balls shaped like tires and chapstick that looks a lot like golf balls. Stress alls, as it turns out, are a popular item at a golf tournament. (Only a few people nearly teed off with their golf-shaped chapstick.)

These are typical vignettes from the ladies-only tournament, which often draws the same teams year after year to enjoy a day of female sportsmanship (and vodka lemonade). The annual golf tournament raises funds for the Monument Health Cancer Care Institute Image Restoration Program. Our friends at Monument Health told us this year’s event raised $33,800 — an all-time record! It is the largest all-woman tournament in South Dakota, and this year’s 14th annual event was Aug. 9 at the Golf Club at Red Rock. We enjoyed being part of it, and appreciate everyone who helped make it such a fun and successful fundraising event! 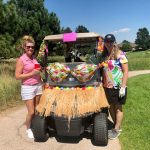 Veronica and Jodi started out the day with their cart covered in balloons. But as they drove to their first hole to tee off, they went under a tree and a loud “POP” echoed across the green, followed by gales of laughter. By the end of the day, sadly, no balloons had survived. 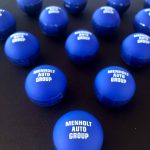 Our chapstick that does bear a resemblance to golf balls. 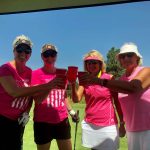 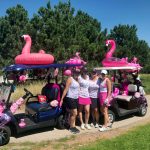 Cortney, Arissa, Megan and Kristi had their carts “flocked” with festive pink flamingos. 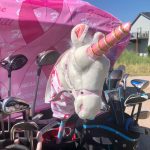 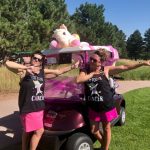 Missy and Angela dab with the best of them to show cancer it’s not nearly cool enough for them or their accompanying unicorns.